For 4 billion years the phenomenon of the tides cradles the terrestrial littorals.

You can have a poetic vision, be surprised when you discover it the first time, live at your own pace or see them as a manifestation of the laws of physics like scientists. Tides are universal: they
affect any volume of water on the surface of the globe.

Pytheas, a greek sailor and explorer (IV BC) was the first to recognize the tides as  an astronomical phenomenon and especially the influence of the moon. This theory was repeated the following centuries by all the ancient Greek writers (Plutarch, Seneca and especially Pliny). Then for a long time the tides are considered as the expression of phenomena supernatural or the work of sea monsters.

From the XVII century, thanks to the great discoveries and the astronomical advances the "scientists" rethought the tides in term of astronomy. It was at Laplace (1749 -1827) that we owe in 1795 the birth of oceanography from 1839 calculations and forecasts of the tides. 2500 years will have been necessary for the human spirit to master the understanding of the tides.

There are 3  factors that affect the tides: The Earth, it is on her that one notes the effect of the tides due to the 2 other stars; the moon and the sun. The moon near the Earth has an effect 2 times larger than the sun, bigger but very far away.

We know since 1839 (publication of the 1st directory of the French tides) the calculation of past tides was interesting for the historians eager to reconstruct naval battles - and also predict future tides.

In summary, a significant tide occurs when the Moon is in a "near-Earth" position and in alignment
of the sun.

A high tide is when the moon and the sun fire in the same direction, their gravitational forces are cumulative to fire stronger and raise the sea further. This phenomenon occurs during the equinoxes, in March and September when day and night are of equivalent duration.

In the bay of Mont St Michel as in other bays or estuaries of the world, the phenomenon is more important: the bay is like a big "V" between Brittany and Normandy and the water is dormant with nowhere to go.

The tides regularly offer us a great show that always fascinates us. 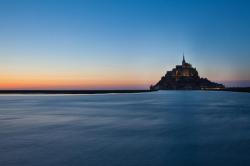