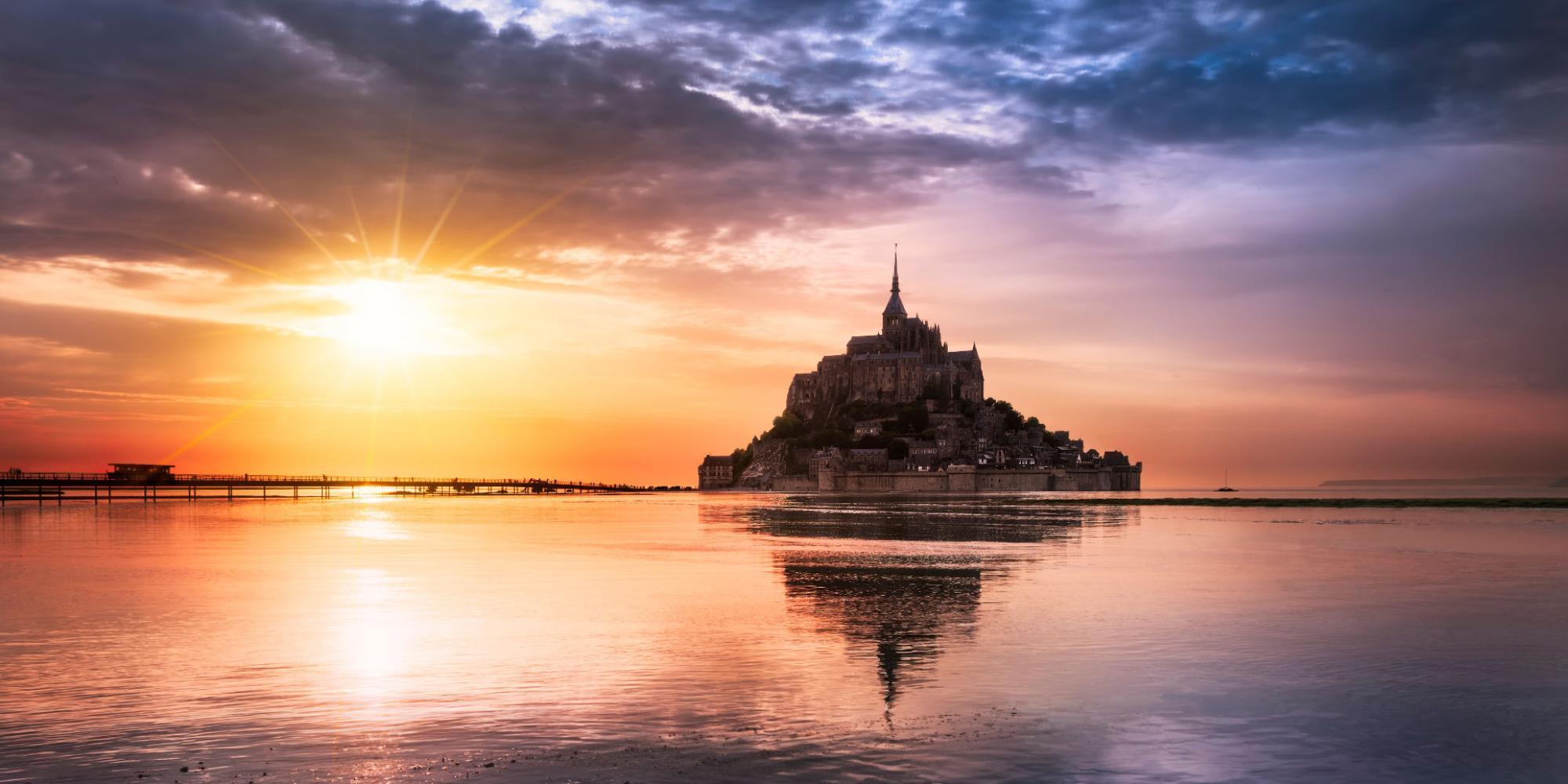 Should we still present Mont Saint-Michel? This architectural masterpiece and high place of pilgrimage since the Middle Ages has been a UNESCO World Heritage Site since 1979. Come and immerse yourself in history through its charming cobblestone streets and alleyways, admiring the ramparts and the old houses, and of course visiting the abbey founded in 708 by Bishop Aubert.

But do you know his story? Everything begins with a dream, the dream of Saint Aubert ... 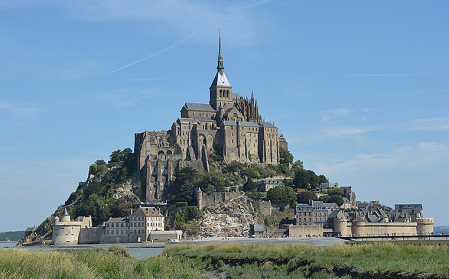 In 708, Saint Aubert, bishop of Avranches, was visited in dreams by Archangel Michael three times, three nights in a row. Each time, the latter instructed him to build in his honor a place of devotion on Mount Tombe, a steep rock at the mouth of the Couesnon. To convince Saint Aubert, the Archangel Michael did not hesitate to leave his finger mark on the forehead, even punching his skull as can be seen at the Basilica of St. Gervais Avranches where he is exposed. Following this third apparition, Aubert set to work and undertook the construction of the famous abbey of Mont Saint-Michel.

Thus, the dream of a bishop gave birth to this jewel of architecture still admired centuries after its construction: even today, the spectacle of this abbey perched on its rocky island enchants and still arouses admiration.

The "Wonder of the West" is indeed the 3rd most visited tourist site in France. The millions of pilgrims have given way mainly to tourists, who flock to visit the Benedictine abbey dedicated to the Archangel Saint-Michel, the central point of the visit.

Inside, you can discover and visit twenty rooms and the cloister, a work of art unique in the world perched between the sky and the sea. Witness of history, this masterpiece of medieval architecture It is composed of several buildings of different eras and styles, since its construction started in the 10th century and continued until the 19th century restorations. 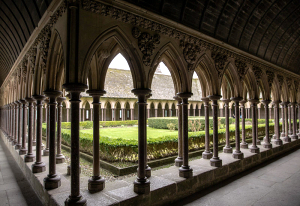 The oldest part of the Mount is the church of Notre-Dame-sous-Terre, a chapel that was part of the early Carolingian constructions of the early 10th century. It was built to replace the Saint Aubert oratory of the 8th century, which became insufficient to accommodate all the faithful. At Mont, you went for a dive into history, architecture and archeology all in one!

And, at the top 160 meters above the sea, stands a statue of St. Michael gilded with fine gold, threatening with his sword the dragon.

Did you know that Mont Saint-Michel has not always kept its vocation as a place of worship? This is a lesser known page in the history of the Mont ... After the revolution, the abbey is transformed into the terrible "Bastille of the seas" which imprisoned in its dungeons alternately refractory priests, prisoners of common law or political prisoners. The Mount served as a prison until 1863, when he found his exclusive spiritual vocation.

In the village that has formed at his feet, you can walk through the streets and charming streets. The entrance to the Mont is through the Porte du Roy, imposing and splendid, passage required from the first steps in the village. After a series of doors, start the Grande Rue, a long ascending street that crosses the village and will take you to the abbey at the top.

Along the way, there is a great deal to see: the old guard corps of the bourgeois, some beautiful houses of the 15th and 16th centuries, the passage of the drawbridge, the way of the ramparts, the small parish church Saint-Pierre, charming and richly decorated, the Tiphaine house, the Gabriel Tower, magnificent and imposing ...

Namely, the village is still inhabited by forty people, including a community of ten brothers and sisters of the Monastic Fraternities of Jerusalem.

A little out of the way, do not miss the Chapelle Saint-Aubert, a remarkable Romanesque church from the 12th century. Discreet and hidden behind the rock, it is accessed by following a path outside the ramparts. 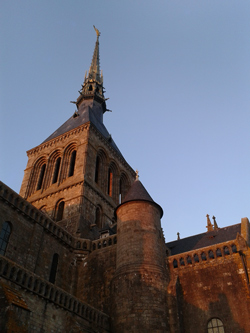 And after years of desensitization, Mont Saint-Michel has found since 2013 its island character. It is now necessary to take a footbridge to join it, only linked with the continent during the high tides. If you have the opportunity, come and contemplate the spectacle of Mont Saint-Michel surrounded by water: it becomes an "island" during the high tides of equinox for a few hours. A magical show!

"I had first seen it from Cancale, this fairy castle planted in the sea. I had seen a blurry, gray shadow standing in the misty sky. I saw it again from Avranches at sunset. The immensity of the sands was red, all the immeasurable bay was red; only the steep abbey, pushed up there, far from the earth, like a fantastic mansion, as stupendous as a dream palace, improbably strange and beautiful, remained almost black in the purple of the dying day. I went to her the next day at dawn, through the sands, her eyes fixed on this monstrous jewel, as big as a mountain, chiseled like a cameo and vaporous like a muslin. The more I approached, the more I felt raised with admiration, for nothing in the world, perhaps, is more astonishing and more perfect. " 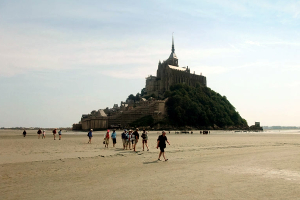 Discover the Bay of Mont-Saint-Michel with the crossing of the Bay on foot with experienced guides through nature walks safely.

Discover the paths of the Bay of Mont Saint Michel in public outings (in good physical shape). Educational activities, integration into pilgrimages.

A formidable vector of emotions and scenery ...

Discover the Abbey of Mont-Saint-Michel, one of the first sites inscribed by UNESCO. Built from the 10th century by the Benedictine monks, its architecture testifies to the mastery and know-how of its architects on an inhospitable site: an undeniable technical and artistic feat.

In order to discover ALL tourist activities and visits to our beautiful region, Les Bruyères du Mont invites you to read the OTHER pages "tourism" below ...

Gardens of the Abbey : Wikipédia

View of the Mont-Saint-Michel : PicturesBoss

Hikers at the foot of the Mont-Saint-Michel : Wikipédia

Travel with confidence, discover our health and safety rules