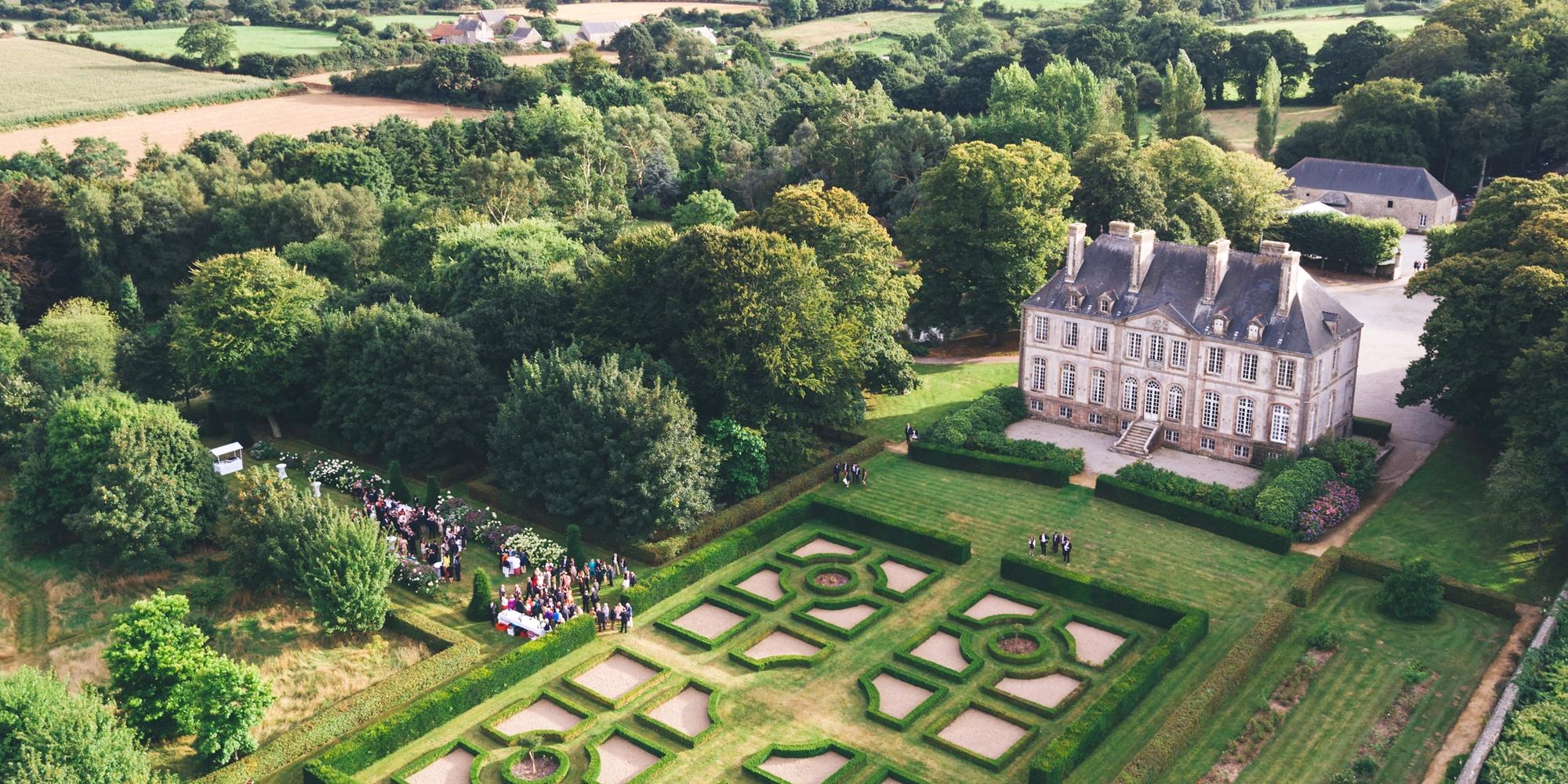 While Mont Saint-Michel is certainly the best-known site in the region, the whole bay and its surroundings represent a territory rich in tourist, cultural and leisure sites. This region reflects its rich history by the many vestiges of the past that dot it: Romanesque churches, thousand-year-old abbeys, majestic castles, museums, fortifications, dungeons, priory and places of memory ...

Let's embark on an overview ...

A few kilometers east of the "Bruyères du Mont", here you are in Ducey, a charming flower-filled village at the entrance of the bay, an old port now silted up. On the banks of the Sélune, the imposing 17th century Montgommery castle of the Montgommery overlooks the entrance of the village. This historical monument is the work of Gabriel Montgommery II, Gabriel I's son called "the regicide".

Avranches is about ten kilometers from the "Bruyères du Mont". This welcoming and friendly city was founded more than 2,000 years ago at the end of a granitic promontory and offers beautiful walks and discoveries.

The past is never far away ... You can see the remains of a dungeon disappeared in the 19th century, or walk in the street of "the beautiful Andrine", named in honor of the Cathedral of St. Andrew , a masterpiece of Romanesque art unfortunately destroyed in the 18th and 19th centuries.

While walking there, you will also be able to see the Notre-Dame-des-Champs church, a vast neo-Gothic building adorned with fantastic gargoyles. Of course, do not miss, if you are in Avranches to visit the Basilica of Saint Gervais and the "treasure" of Father Cornille, consisting of goldsmiths, religious clothing and sculptures in stone and wood. And of course you can see the skull of Bishop Aubert, perforated where the archangel Saint-Michel would have touched.

For a restful moment in the heart of the city, the Jardin des Plantes in front of the Notre-Dame-des-Champs church opens its doors to you: this beautiful and well-kept park offers its visitors a beautiful view of the Mont Saint Michel. Come stroll through its 12 gardens with enchanting names such as the garden of camellias, maple wood, cherry meadow or school of fruit, in this garden that inspired various writers including Guy Maupassant, Stendhal, Victor Hugo or Paul Féval. It has several remarkable trees like the araucaria nicknamed the "despair of the monkeys" because of its very rigid and pointed leaves.

A little further up the coast, you will find Granville, the "corsair city" now a seaside resort where it is good to stroll ... With the decline in fishing activity, Granville has developed its tourism business, and has no shortage of assets for this: you can walk in the upper city belted walls, in the historic district, enjoy the beach in the city center, visit the marina, admire the art deco casino or the Villa Rhumbs, the childhood home of Christian Dior that has become a  museum. The so-called "Monaco of the North" is a city that breathes the sweetness of life ... all in elegance.

It is also from here that the departure for the Channel Islands is often made. Will you be able to resist the call of the sea and marine adventures?

A history and regional traditions, a unique local know-how

Several museums in the region allow you to discover the activities of yesteryear ...

To better immerse yourself in the past, the Scriptorial Avranches will allow you to discover the history of the manuscripts, Avranches and Mont Saint-Michel. Avranches, the city of manuscripts, was indeed the depository of the collections of books of the religious communities of Avranchin. During the beautiful visit that awaits you, you will be able to contemplate the illuminations and the works several centuries old exposed, and learn more about the manufacture of parchments and manuscripts in the Middle Ages.

In Dol-de-Bretagne, the Cathédraloscope will give you an insight into the different techniques used in the Middle Ages concerning the construction, decoration, architecture and symbolism of cathedrals.

At the granite park-museum in Saint-Michel-de-Montjoie, dive into the local heritage with the history of the last granite extraction center "Bleu de Vire" in a magnificent setting.

The Norman Furniture Museum in Villedieu-les-Poêles is a great demonstration of the know-how of the Norman cabinetmakers, but the city is best known for its great tradition of copper craftsmanship since the Middle Ages. You can visit the bell foundry in the workshop Cornille Havard. A visit that is out of the ordinary!

The pottery museum in Ger welcomes you to an old pottery village, to make you discover  a new way the life and work of the potters of the Ger from the 15th to the beginning of the 20th century.

Finally, the Écomusée mill Sée installed in a former paper mill traces the journey of salmon and the industrial past of the valley of the Sée, crafts and industries of yesteryear, and presents the natural wealth of the region.

Remarkable buildings, a dive into history: castles, abbeys and cathedrals ...

South of the "Bruyères du Mont" stands the castle of the Rocher-Portal Saint-Brice-en-Coglès: this exceptional site of great architectural interest is nicknamed the "French Downton Abbey"! This building with beautiful roofs was built by Gilles de Ruellan, a Breton of modest origin who became one of the richest men in France, close to Henry IV and Cardinal Richelieu.

To the north, the Sainte-Trinité abbey of Lucerne forms a beautiful medieval monastic ensemble of the 12th century, preserved in the hollow of the wooded valley of Thar: Romanesque abbey church, cellars, lavatory, refectory, room of hosts, dovecote or still dwelling abbatial ... There is a lot to see there.

A little further north, you are in Gavray, the opportunity to take a nice walk in the course of which you will discover a ducal castle abandoned since the 17th century, perched at the top of a rocky outcrop overlooking the rivers Siena and BERENCE.

And still a little further north, you can admire the Cathedral of Coutances, historic capital of the Cotentin, a masterpiece of Norman Gothic. This city of art and history that stretches on a hill with steep flanks also has attractions: gardens and parks, beautiful mansions, churches Saint-Pierre and Saint-Nicolas.

Let's go now in another direction ... In Pontorson, less than 20 kilometers southwest of the "Bruyères du Mont", you will discover a millenary Norman city steeped in history with the Romanesque house of the 12th century, the remains of a fortress medieval, the massive church Notre-Dame, the Protestant sermon, the hotel Montgommery.

Continuing west, why not make a jump into Brittany? This will be an opportunity to visit Mont-Dol, a charming village perched in Ille-et-Vilaine encircled by granite cliffs. In addition to visiting the church and its ancient frescoes, you can take a nice walk on the hill of Mont Dol to reach the Notre-Dame tower at its summit and enjoy the beautiful view of the bay of Mont Saint-Michel.

Its neighbor, Dol-de-Bretagne, is a medieval city with the charm of yesteryear. You will be able to admire by strolling in the old city of magnificent half-timbered houses, in particular "Small Palets", the oldest house of Brittany. The city's must-sees are the 12th-century Gothic Saint-Samson Cathedral, the 14th-century Beauvais Manor, the 18th-century Belle-Noë Manor, owned by the famous Surcouf corsair, and finally the house of the Guillotière of the 15th century.

In order to discover ALL tourist activities and visits to our beautiful region, Les Bruyères du Mont invites you to read the OTHER pages "tourism" below...

Abbey of Lucerne : Official site of the bay of Mont-Saint-Michel

Travel with confidence, discover our health and safety rules